Why IF/VF Tires are Being Developed

In recent years, the sight of IF/VF tires in the field has become increasingly common. It should come as no surprise that as the adoption of IF/VF technology climbs, so do the offerings featuring this innovative technology from Alliance Tire Group and the industry as a whole. Although the industry is quick to preach the benefits of IF/VF tires, to truly appreciate what these tires are capable of doing, you need to know why they were developed in the first place. 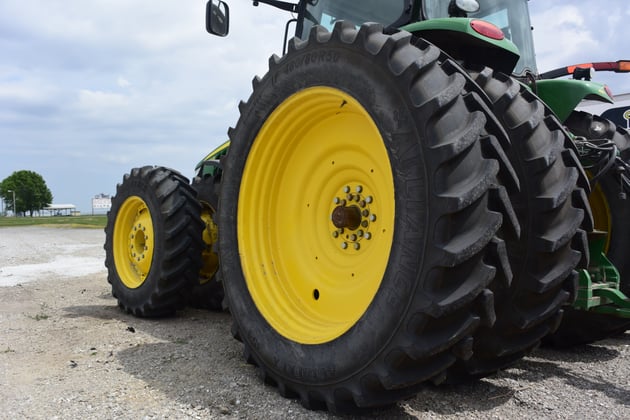 An evolution of the standard radial tire, IF/VF tires are built to keep pace with shifts in the farming industry and the way people farm, most notably the growing size of today’s farms. Larger farms have caused a ripple effect throughout the industry; with farmers now facing longer distances to travel, more land to manage, and larger harvests, they’ve turned to bigger, heavier, and more powerful equipment. The use of this massive equipment has required tires to evolve to meet the new demands of this machinery in two ways: (1) the ability to run a tire at the same pressure with more load than a conventional radial, and (2) the ability to carry the same load with less pressure.

IF/VF tires help farmers maximize the advantages of their bigger and heavier equipment by ensuring the power is put to the ground, the machine is capable of efficiently traveling both in the field and on the road, and that this heavier equipment doesn’t cause undue soil compaction and negatively impact yields. IF tires are capable of bearing 20% more weight than a similarly sized radial tire at the same inflation pressure, while VF tires can bear 40% more weight at the same pressure.

Lower inflation pressure offers a host of advantages to farmers, but perhaps none more significant than the reduction of soil compaction. Caused in the moment it takes to run over a piece of ground, the impact of soil compaction can be felt for years by farmers. Today’s mammoth machines put more pressure on the ground than their predecessors, making them more likely to cause compaction.

More Tread on the Ground

Like other advancements on the farm, from seed technology to drones, the main job of IF/VF tires is to help farmers make more money. Whether it’s helping farmers increase the efficiency of the latest and greatest farm equipment or reducing that same equipment’s potential for yield-inhibiting compaction, IF/VF tires are helping farmers tackle the issues raised by the industry’s evolution.

If you’d like to learn more about how IF/VF tires work, check out our Simple Guide to IF/VF Tires or contact your Alliance Tire Dealer today to put our IF/VF tires to work on your farm.